This Simple Mindset Shift Can Transform A Stiff, Resistant Horse

In Part 1, I introduced you to Gina and her bay Arabian gelding, Piper. Gina was frustrated that Piper resisted bending, especially to the right.

Gina’s trainer had demanded that she use stronger, more insistent aids, but that just created more conflict and unpleasantness between horse and rider.

When Gina consulted me, I noticed that she sat heavier on her left seat bone, which made it difficult for her horse to bend. This unbalanced sitting can cause back pain, stiffness and tension in both horse and rider.

I led Gina through a Feldenkrais® exercise that improved her body awareness and helped her to sit balanced on her seat bones. Happily, it also got rid of her back pain and sciatica!

But the next time Gina rode, she was disappointed to discover that Piper still didn’t bend easily. She was sitting in balance, so why wasn’t her horse bending when she asked?

I explained that her horse had spent a lot of time bracing against her crookedness and tension. Stiffening against the rider had become a habit for Piper. The bay Arabian would need to be gently convinced that his body could relax and relearn how to bend easily.

While it can be tempting to use stronger aids, that’s a bad idea. Here’s why.

Gina’s trainer believed that the way to get Piper to bend to both sides was to work him longer and harder on his “stiffer” side. It’s a common belief. But that doesn’t make it right.

Let’s imagine what Piper would think if Gina insisted on “working him through it.”

“I can’t trust my rider. It’s clear that she isn’t looking out for me. I resisted bending because I’m stiff and uncomfortable, but I did it just to get the whip and spur to stop. Now I’m sore, tight and anxious. I don’t know what I’ll do if she asks me to bend again. I don’t like this feeling!”

In addition to being incredibly unkind, such aversive tactics often lead to injury, strain and anxiety in the horse. Not to mention broken trust.

Gina decided that wasn’t the route she wanted to take. I bet you don’t want to go down that road either.

Fortunately, you can improve your horse’s performance and deepen your relationship by embracing compassionate curiosity.

Compassionate curiosity starts with discovering how your horse feels, both physically and emotionally. And then supporting your horse to move in novel, pleasurable ways that improve coordination, confidence and flexibility.

That shift in thinking takes you from a relationship based on domination to a true partnership. One that benefits both horse and human.

Let me tell you how that played out with Gina and Piper.

Running my hands over the bay gelding’s back, I felt his tense muscles, with the left side being tighter than the right. Such chronic contraction causes soreness and fatigue and would prevent the gelding from bending easily to the right.

While I had helped Gina resolve the all-too-common problem of uneven seat bones, it would not be enough to only work with Gina. When a horse has been compensating for a rider’s idiosyncrasies for some time, he often develops habits of tension and stiffness that don’t automatically disappear when the rider becomes balanced. The bottom line: both Gina and her horse, Piper, needed to retrain their brains!

Before Gina met me, she had been doing “carrot stretches” with her horse, hoping that this exercise would improve her gelding’s ability to bend.  She would hold a piece of carrot out at various angles and the gelding would reach for it, often bending and stretching quite a bit in order to obtain the goodie.

But there was a downside to those stretches.  The sensation of stretching drowns out more subtle sensations that would allow the gelding to learn how to bend in a healthier, more athletic way.

With stretching, Piper was still habitually overusing some parts and under-using others. He just made the movements larger. Not better. Over time, such unhealthy movement can lead to soreness and injury.

Just repeating and/or exaggerating a movement will not improve it.  In addition, because there was a carrot waiting for him if he stretched far enough, Piper stretched beyond what was truly comfortable, giving his nervous system the experience of limitation, not freedom of movement. That isn’t good.

Don’t stretch. Retrain the brain instead!

Since a horse will override signals of pain or discomfort in his attempt to obtain the treat, I did away with the food enticement. I wanted Piper to be more aware of his body, not less so. I explained to Gina that instead of asking Piper to stretch, I wanted to engage Piper’s attention in the process of bending and help him learn new, more comfortable and athletic ways of doing it. Just like the work I do with humans, we needed to retrain the horse’s brain.

Chunking down a movement gives the horse the opportunity to do each piece smoother and easier.

The first thing I did was to break the process of bending down into smaller parts. This is known as “chunking down.” Asking for the whole movement (the entire bend) would result in Piper doing the same thing he always did. But by exploring each small piece of the movement at a time, Piper would have the opportunity to change his usual response. This is huge.

Since Piper could bend to the left easier than to the right, I placed my hands on Piper’s left ribs and gently brought the ribs closer together in several places.  Piper remained at ease. Bringing the ribs together can have the effect of softening the neck, rib cage and back muscles and can help the horse learn how to bend more easily.

A relaxed horse can learn. An anxious, defensive horse cannot.

Notice that I chose to begin this bending lesson on Piper’s easier side. This is important. This allows the horse to feel safe, since no one is contradicting what he feels comfortable doing.  A relaxed horse is receptive to learning.  An anxious, defensive horse is not.

Since my hands were doing the work of Piper’s muscles by bringing the ribs closer together, Piper’s nervous system could sense that the habitual contractions were no longer necessary and could let those overworked muscles relax. I call these movements Rib Accordions. 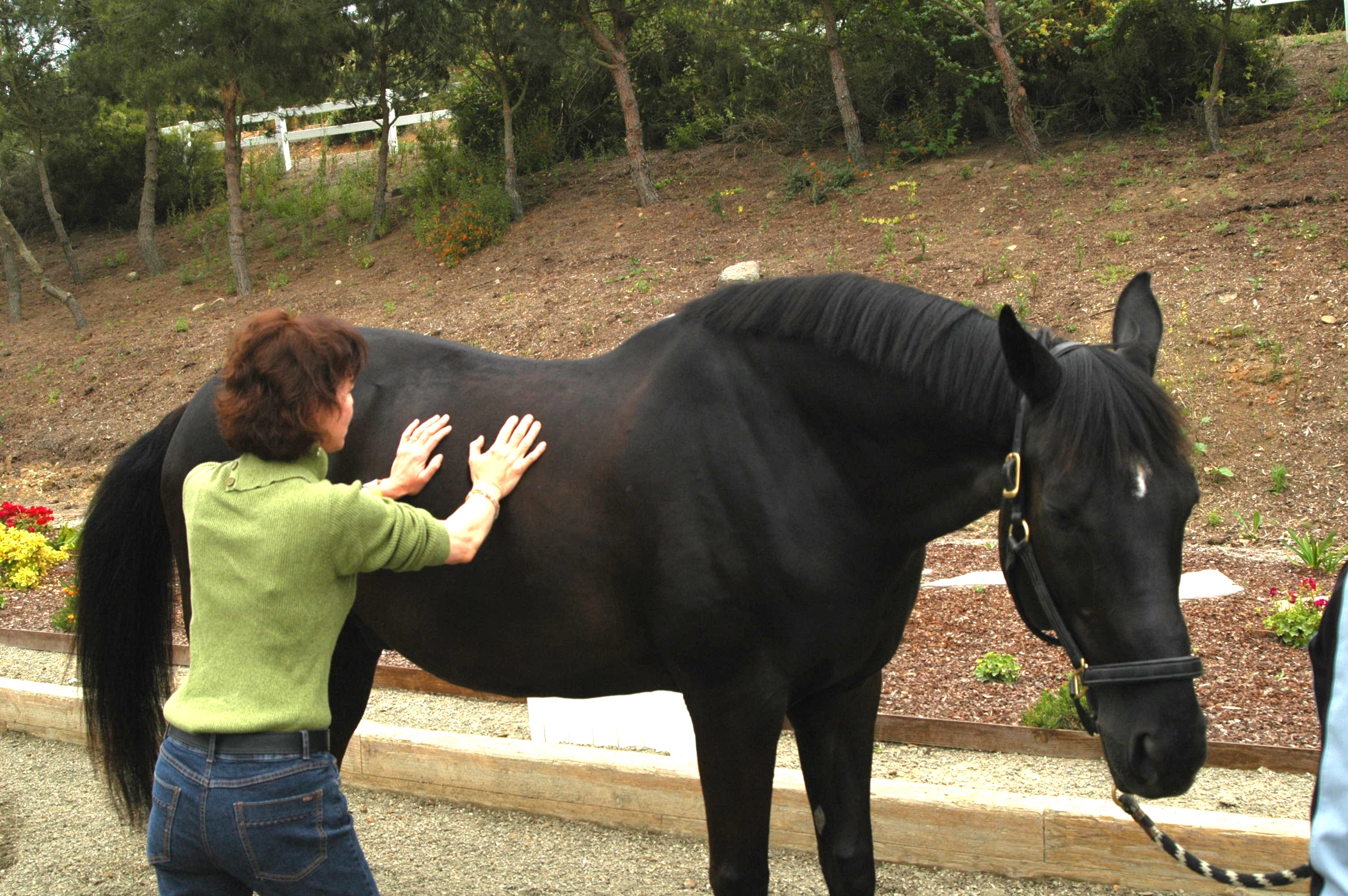 Click on the video at top of this post to see Mary demonstrating Rib Accordions with a horse.

I then moved around to Piper’s right side and, reaching across Piper’s back, I cupped my hands around the muscles just to the left of his spine. Slowly, I brought my hands towards me, gently coaxing Piper’s back to follow. This subtle movement helps to mimic the movement of the back and barrel when the horse is bending to the left. I worked my way from Piper’s withers to his tail and back up to his withers again.  I did this for several minutes, while Piper, his head hanging down, remained relaxed.

Your horse’s neck, sternum, ribs, back and pelvis are all involved in bending.

Healthy bending involves more than just the obvious parts of the horse. It’s a “whole horse” event. The neck is one of those parts that must soften and participate in the movement. But the neck can only be soft and mobile if the horse’s rib cage moves freely.

To give Piper this experience, I put one hand lightly on his neck while my other hand brought delicate movement and awareness to his sternum. When Piper’s sternum moved, I could feel the movement in his neck. More importantly, Piper’s brain would create new neural connections for this healthy coordination of his neck and sternum. And bending could become easier for him.

The gelding’s neck muscles became noticeably softer. Putting my hands lightly on his neck, I showed Piper how he could move each section of his neck independently and easily. 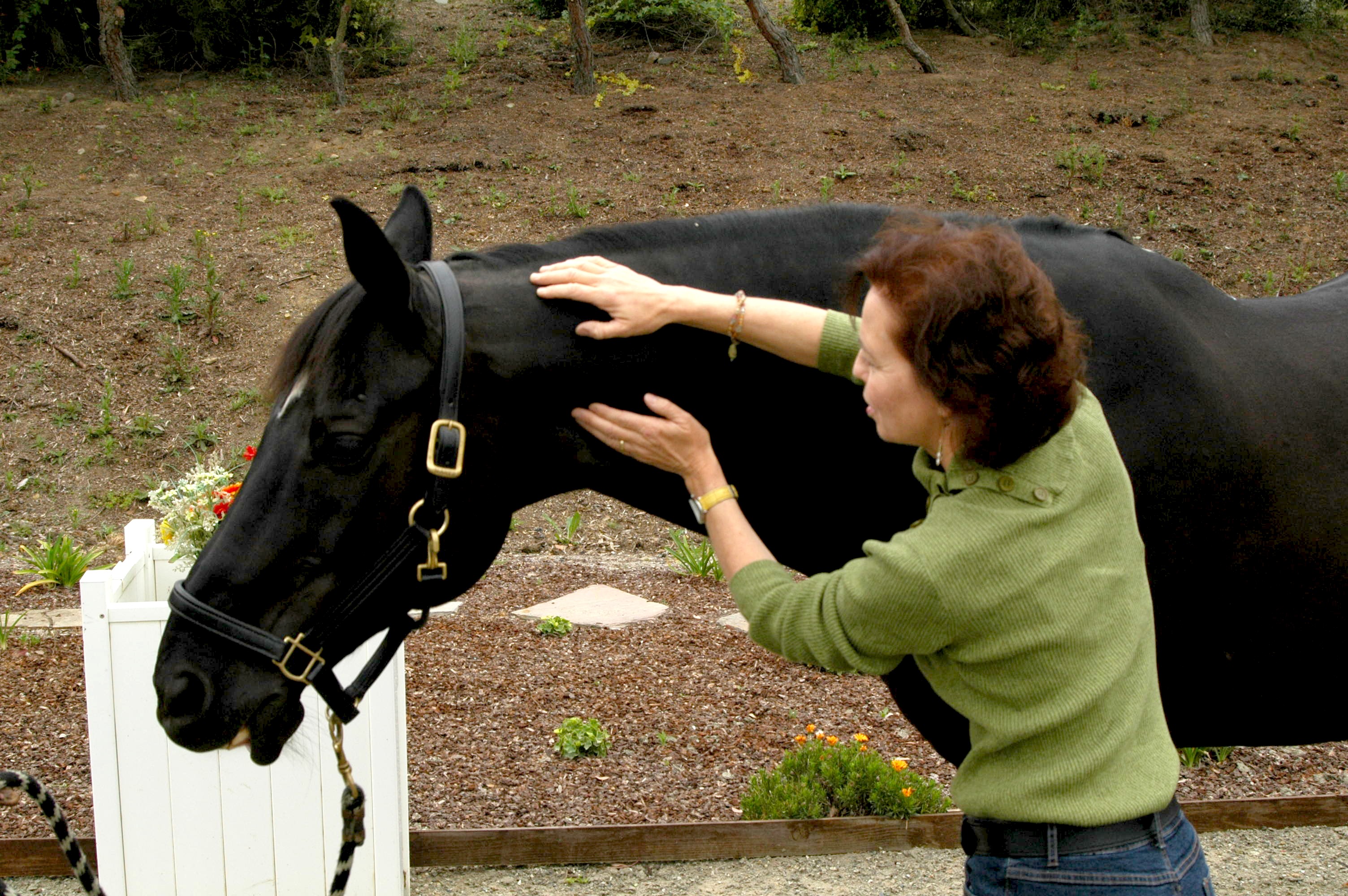 The horse learned how to coordinate his parts to produce smooth, effortless movement.

Now it was time to put the pieces together. For this, I elicited Gina’s help. I brought Piper’s left ribs together as Gina coordinated turning Piper’s head slightly to the left. We again helped Piper feel how moving his sternum could influence his neck and make his movement freer and more comfortable. We eventually added in movements of his back and pelvis too.

We then repeated these movements on Piper’s right side, which had been his more difficult side. Throughout, Piper stayed soft and relaxed. He was learning how to coordinate all his parts to bend smoothly and effortlessly.

After Piper improved his bending to both sides while standing still, I began to work with him while Gina led him at the walk.  We took Piper into the arena, using the corners as a visual reminder of bending, while my hands guided and supported his body.

We tacked up slowly, continuing our hands-on work as we added each piece of equipment.

Studies in neuroscience show that doing novel activities in different places and in different orientations can help the brain create longer-lasting change. We used this bit of neuroscience to our advantage, adding pieces of tack as we went along. Eventually, I had Gina in the saddle. All these variations helped Piper integrate the improvements into his work under saddle. In other words, he’d be able to keep these positive changes when he was ridden!

Feldenkrais® had given Gina better body awareness, and she could feel her horse more clearly too.

You can see why it was essential that Gina learned how to sit in balance on her horse. If she had not done the Feldenkrais® awareness exercises, her crookedness would continue to unintentionally sabotage her horse, worsening his physical and behavioral issues.

Fortunately, she had done the exercises. She was now sitting evenly and lightly on her horse. Gina told me that she could now feel a lot more too. She sensed if Piper showed even the smallest amount of resistance and she adjusted her position and cues to support him.

Feldenkrais® had given her not only better body awareness, but also emotional awareness of her horse. This was deeply transformational for her.

Gina committed to becoming the rider her horse deserved. To that end, she kept improving her body awareness and hands-on skills. She and Piper became relaxed and happy together, and it was gratifying to see horse and rider progress into an elegant, harmonious partnership.

Mary Debono, GCFP has a passion for helping horses and their humans move easier despite injuries, arthritis, anxiety and aging. A Certified Feldenkrais® Practitioner and life-long horsewoman, she’s an international clinician and best-selling author.