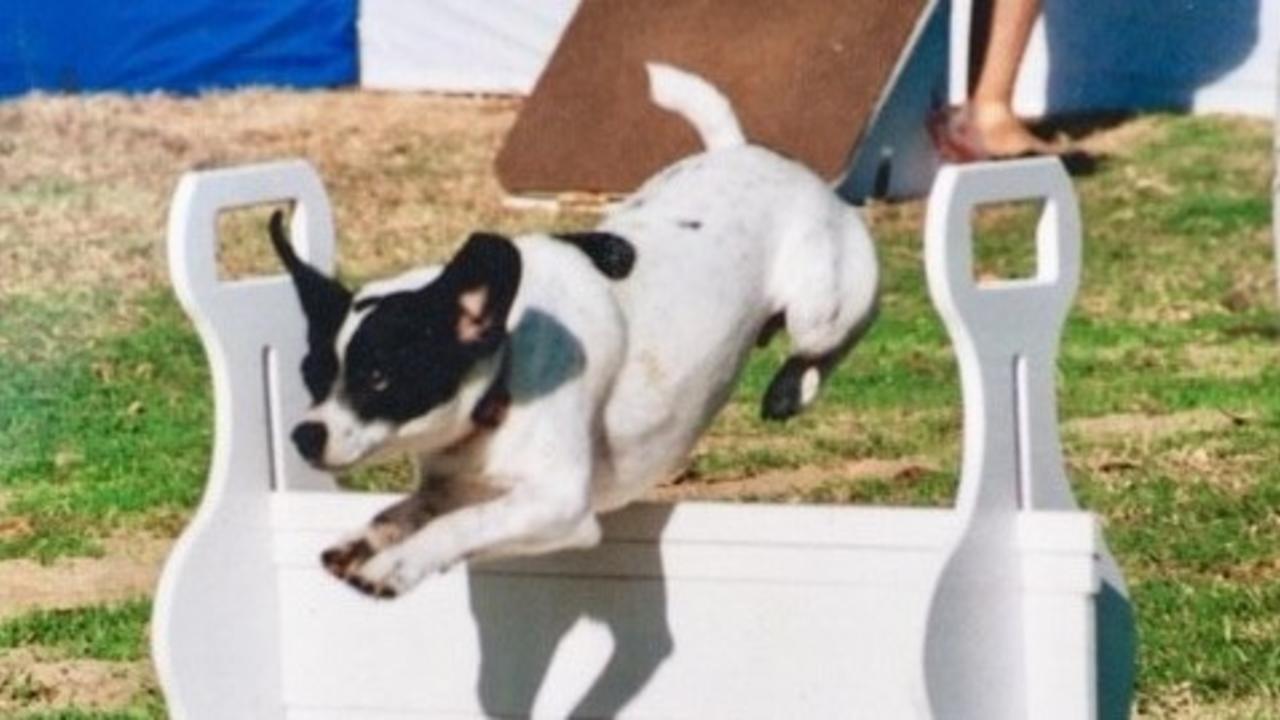 Vicki found her black-and-white dog suddenly unable to pick up his head. The dog, whose name is Nicky, was moving very slowly, holding his head unnaturally low and still. Vicki immediately rushed the 17-pound dog to the veterinarian, who fortunately ruled out a spinal injury. Nicky was diagnosed with a soft tissue injury and prescribed anti-inflammatories and rest. The vet also gave the okay for me to work with Nicky to help him recover fully.

How exactly the dog injured his neck was anyone’s guess, but the ten-year-old canine dynamo was often seen jumping off beds, couches and stone walls. Nicky, who was probably a mix of Chihuahua, Cocker Spaniel and Rat Terrier, may have had a collision while roughhousing with one of his larger canine siblings.  He also excelled at doing the “zoomies,” running in circles at top speed around their expansive back yard. It was this enthusiasm for motion that helped him become a fine canine flyball athlete. Nicky was a bundle of energy and love, and so very irresistible. Vicki didn’t have to work hard to convince me to see him as soon as possible.

I had known Vicki, an avid dog lover, for years. I first met the tall, blonde woman when her elderly Australian Shepherd began having issues maintaining his balance and walking.  Vicki’s home, located just a few minutes from my office, was full of happy, rescued dogs and I always enjoyed going there.

I knocked on Vicki’s door and was invited in.  As I entered her spacious, tiled living room, four dogs of various sizes greeted me. As the black-and-white dogs barked and jumped around me in greeting, I had to laugh. I teased Vicki that she was so coordinated that even her dogs matched!

But my smile faded when I realized that Nicky was not among my greeters. It felt odd that the pint-sized dog was not a part of the joyous canine melee that always announced a visitor’s arrival. When she saw me looking around for Nicky, Vicki pointed to a corner of the room.  There I saw the little short-haired black-and-white dog standing quietly, his head down.

Connecting with the dog is an important first step.

As Vicki ushered her other dogs out of the room, I walked over to Nicky to say hello. Sitting on the floor next to him, I asked him to lie down on his bed. When Nicky rested on his left side, I put my hands ever so gently on his rib cage, feeling the rise and fall of his chest. Taking the time to breathe together helped me create a connection with the little dog. My quiet, listening hands assured Nicky that I wasn’t going to cause him discomfort.  After a couple of minutes, Nicky’s breathing become deeper. So did mine.

Slow, rhythmic movements can be used to stimulate recovery of an injured or anxious dog.

The little dog and I breathed together for several minutes, then I slipped the tips of my right middle and ring fingers into the small space between two of Nicky’s ribs. I slowly lifted the soft tissue in a small circle, putting a tiny bit more pressure on the upward arc of the circle. The emphasis on the upward lift can provide a feeling of relief to sore, tight muscles.

I then slid my fingers up a little bit and made another circle. I circled my way up Nicky’s side until I reached the little dog’s back. I then repeated this process in the space between an adjacent set of ribs. And then between the next set of ribs, and so on. I made these circles slowly, lightly and rhythmically. Hence their name, Rhythm Circles.

The slow, gentle movements relaxed Nicky, interrupting the vicious cycle of pain and anxiety that an injury can create. As I drew Rhythm Circles between his ribs, I imagined each one becoming a healing vibration that spread out like ripples in a pond. After doing this work for more than 20 years, I have developed a theory about animals that suffer injury, pain or stress. It seems that a single traumatic event, or a series of smaller traumas, can cause some animals to lose the internal rhythm that helps regulate their well-being.

Rhythm Circles feel pleasant and soothing. But they also feel unusual, not at all like the common sensations produced when we pet or scratch our dogs. Since non-habitual experiences stimulate the brain, the Rhythm Circles could “wake up” Nicky’s rib cage, creating new neural connections between his brain and his rib cage.

This would make it more likely that Nicky would use his rib cage to help turn his head, reducing strain on his neck. The less strain the dog experienced, the better the chance that his neck would heal without complications or delay.

Improving the movement of the rib cage can reduce strain in the neck.

I continued making Rhythm Circles for about 20 minutes. Then it was time for Nicky to experience how easily his rib cage could now move.  Since the rib cage, shoulder and neck are so closely connected, improvements in one part contribute to improvements in the other parts. With the little dog still lying on his left side, I placed my palms lightly on the right side of his rib cage.

Nicky and I spent a moment simply breathing together, then I gently slid his rib cage towards his head, holding that position for several seconds. This was a very small movement that is felt, but not easily seen.  Nicky began to take deeper breaths, which let me know that it was a pleasant sensation and was probably relieving stress in the muscles at the base of his neck. I released my light pressure very gradually, letting his rib cage gently slide back. We repeated these Rib cage Slides a few times.

I continued along in this vein, adding in movements of Nicky’s right shoulder too. Sometimes I moved his shoulder alone, sometimes with his rib cage. Other times I alternated moving them together, then separately, then together again.  These novel movements could stimulate Nicky’s brain to discover easier, healthier movement. 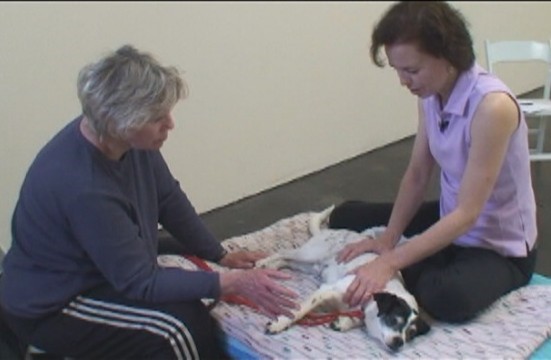 I then sat behind Nicky’s tail and used my hands to help him feel how moving his pelvis could invite movement in his lower back and rib cage. Like a chain, one part of the body affects another. A freely moving neck is dependent on a freely moving rib cage, lower back and pelvis.

Supporting a dog’s skeleton can free up the muscles.  And change the brain.

Next, my fingers found the two bones at the very back of the dog’s pelvis, slightly below the level of the tail. You can easily feel these bones, which together are referred to as ischia. There is one ischium on each side of the pelvis.  I placed my hand against Nicky’s right ischium, and lightly pressed against the bone. My gentle pressure created a subtle wave of movement that traveled from the dog’s pelvis to his head. I held this light pressure for several seconds, then released it very gradually. Nicky’s breathing deepened each time I did this.

It is easy to understand why Nicky enjoyed this skeletal support. Normally, when a dog wants to move, the nervous system tells muscles to contract. These muscular contractions pull on bones, producing movement. But by gently pushing against his ischium, I created a very subtle wave of movement through the dog’s bones while his muscles remained relaxed. The muscles had the novel experience of staying soft as they “went along for the ride” on the bones. This can relieve sore, tight muscles.

But I was after more than temporary muscular relief. I wanted Nicky’s brain to change. Because the skeletal support produced a unique and pleasurable sensation, I knew that the dog’s brain would pay attention to it. And attentive brains can learn to recreate movements that feel good. In order to do that, Nicky’s brain would have to release the habit of chronically contracting muscles.

This change in the brain can create long-lasting improvements in the dog’s movement and well-being.  Simply put, my skeletal support created a learning experience for the dog. It reminded Nicky that his movement could be easy and comfortable if he didn’t habitually tense his muscles.

I continued working with Nicky, supporting and moving various parts of his body. He stayed relaxed throughout, even as I gently turned him onto his right side. Since Debono Moves induces changes in a dog’s overall state, Nicky had already released much of the restrictions on his left side before I turned him.  I only needed a few minutes to let Nicky experience how comfortable and easy movement on his left side could feel too.

As Vicki and I began to walk, Nicky followed us.  We were happy to see that the dog’s head was held at a more natural angle, and he began turning it to look around. It was a significant improvement from just an hour ago. But while the Debono Moves session could improve Nicky’s chances of a complete recovery from his neck injury, Vicki still needed to keep her little dynamo quiet, and to follow-up with her veterinarian. I’m happy to report that Nicky recovered fully! 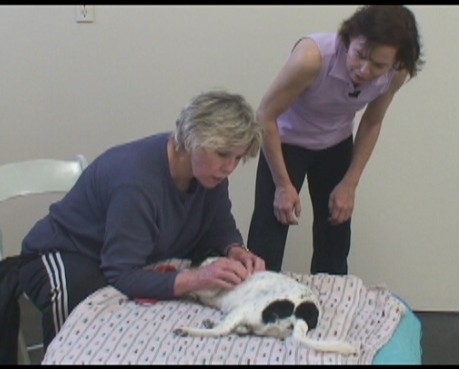 Mary teaching Vicki how to gently work with Nicky's ribs 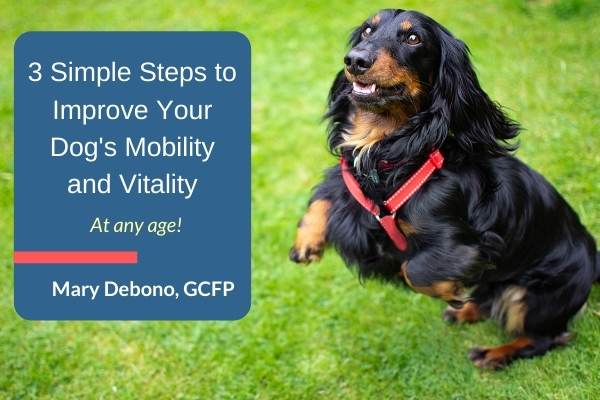 Have an aging, injured or anxious dog? Want to reduce your canine athlete's risk of injury?

It's never too early - or late - to get started.