These Special Moves Can Help an Injured or Stressed Horse Recover

With my hands resting lightly on the bay mare’s rib cage, we simply breathed together for several minutes. Her breathing was shallow. And faster than normal. It was obvious that the horse was stressed. Very stressed.

The mare, whose name was Grace, had recently returned from a camping trip in the mountains. Three days of riding in rocky, mountainous terrain had taken their toll on the horse. She hadn’t been conditioned to handle that type of grueling work.

Her person, a well-meaning woman named Estelle, was distraught when she realized what she had “done” to her horse. Until they were out on the trail, Estelle didn’t realize that her fellow campers would be riding for several hours a day. For three days. On steep, rocky trails.

While riding with her fellow campers, Estelle had been caught up in the moment and probably wasn’t thinking clearly. The bay mare, wanting to stay with the other horses, seemed willing to carry on. So, they did.

When they trailered home to their barn, Estelle could clearly see her horse’s distress. She called her veterinarian, who advised rest, short handwalks and a few days of bute. The mare was closely watched for signs of colic, laminitis and other issues. Thankfully, Grace didn’t develop any of those.

I happened to be at Estelle’s barn and was asked to work with Grace. I was happy to help. One thing I noticed right away is that the muscles along her right shoulder blade were quivering in non-stop spasms. She had been like that for several hours, apparently.

The horse’s shallow breathing and quivering shoulder muscles signaled that her nervous system was in a very distressed, “noisy” state. The horse’s muscles were fatigued, tight and sore. She walked with short, choppy strides. In a nutshell, her body was “fried.”

The mare’s brain was probably fried too. She had never been on a camping trip like that before. And it had been quite an ordeal.

I knew that horses in this state can develop a host of compensatory issues if the situation isn’t turned around quickly. And the sooner, the better. Plus, I wanted the mare to feel better as soon as possible. So, I got to work.

Now, where to begin?

I chose to start by attending to the mare’s breathing. I know that breathing can be both an indicator and a contributing factor of physical and emotional states. In other words, when breathing changes, the nervous system usually changes too.

Deeper, relaxed breathing could help the mare break out of the distressed cycle and begin to regain her freedom of movement, vitality and well-being.

To start, I simply placed my hands softly on the bay horse’s rib cage. I wasn’t trying to change or fix anything, I was simply “listening” to her breath with my hands. My hands registered the rise and fall of her rib cage. Every so often, I moved my hands to another spot on her rib cage.

The comforting feel of my hands on her ribs helped Grace take slightly deeper, slower breaths.

My gentle contact was also serving another purpose. By patiently “listening” to the horse’s breathing with my hands, I was letting the mare know that I wasn’t going to cause her additional discomfort by poking or prodding her sore, tight muscles.

In other words, my hands were “friendly.” They were there to listen and support, not manipulate or correct. I was earning the horse’s trust. 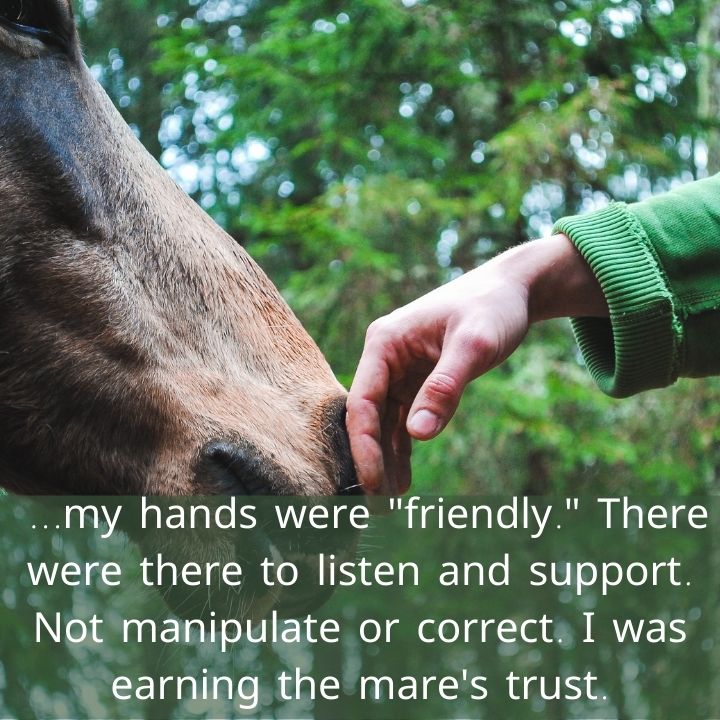 While we were off to a promising start, we were still a very long way from “normal.”

The bay mare and I breathed together for several minutes, then I brought my right hand to the lower border of the horse’s rib cage. This part is known as the costal arch. Using the tips of my fingers, I slowly lifted the soft tissue in a small circle.

I used slightly more pressure when I was moving the tissue toward the costal arch. This emphasis on the lifting motion can provide a feeling of relief to sore, tight muscles.

I then slid my fingers over a little bit and made another circular motion. I worked my way all around Grace’s costal arch, first on one side of the horse’s rib cage and then the other. I also worked between the ribs and all along the horse’s belly area. 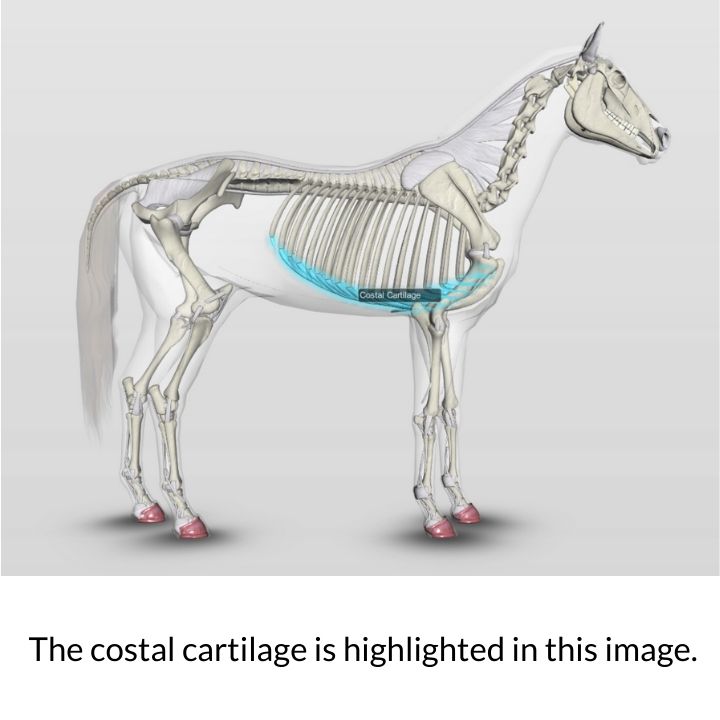 I made these circles slowly, lightly and rhythmically. Hence their name, Rhythm Circles.

These slow, gentle movements relaxed Grace, interrupting the vicious cycle of pain and anxiety. I imagined Rhythm Circle becoming a healing vibration that spread out like ripples in a pond. 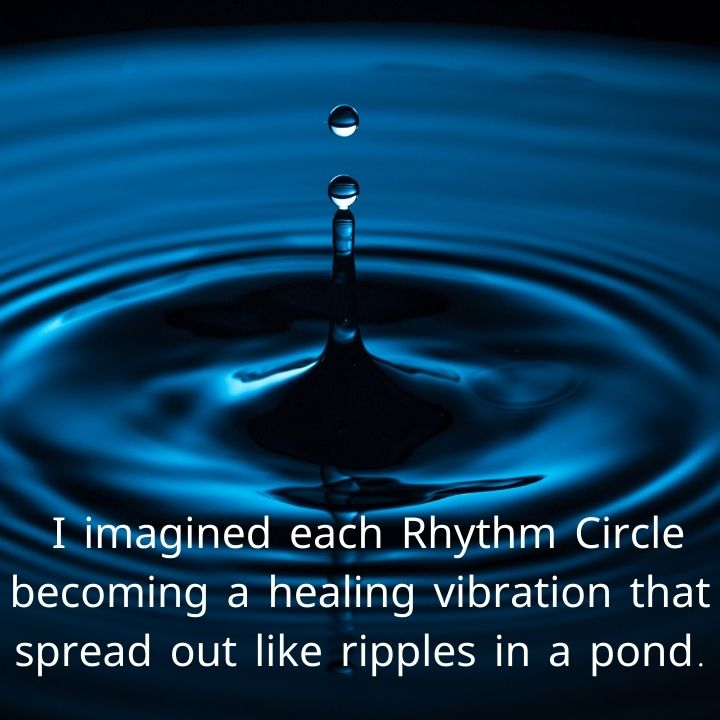 After doing this work for more than 30 years, I have developed a theory about animals that suffer injury, pain or stress. It seems that a single traumatic event, or a series of smaller traumas, can cause some animals to lose the internal rhythm that helps regulate their well-being. I have found that Rhythm Circles act like a metronome, providing a slow, rhythmic stimulus that the animal uses to reset her rhythm.

We also know that unusual or “non-habitual” movements can help wake up parts of the body, creating more comfortable, balanced movement. While Rhythm Circles feel pleasant and soothing, they also feel unusual, not at all like the common sensations produced when we pet, groom or scratch our horses.

Rhythm Circles can have many benefits. Their non-habitual nature can stimulate the horse to create new neural connections. This can improve body awareness and coordination.

As a result, the horse’s movement can become freer and more balanced. With this newfound coordination, overworked areas get a chance to rest and heal.

As I methodically continued with the Rhythm Circles, Grace’s breathing started to relax significantly.

I eventually worked with other areas of the horse’s body, including her shoulder blades. Here again, the gentle lifting motion of the Rhythm Circles could give the mare a feeling of relief in those sore, fatigued, quivering muscles.

After a little while, the mare’s shoulder muscles stopped their spasms. I was elated. I’m sure Grace was too.

After I finished my session with Grace, the mare walked with longer, freer strides. Gone were the quivering muscles and shallow breaths. I’m happy to say that the mare went on to make a full recovery. And I was grateful that I had Rhythm Circles to help get her started on her road back to health.

Note: It’s important to remember that it’s the emphasis on the LIFTING phase of the Rhythm Circle that provides the relief of tension. By lifting and supporting the soft tissue, the brain gets a signal to release the muscular contraction. This lifting, supporting sensation also promotes overall relaxation in the horse.

Rhythm Circles can benefit horses in many ways. So much so, that I’ll be writing more blog posts on this subject!

Summary of some of the benefits of doing Rhythm Circles with your horse:

*There's a scientific basis for this. It's due to the stimulation of a particular type of mechanoreceptor (CLTM) in the horse. The Rhythm Circles must be done the way I teach them for this to occur. I’ll write more about this in a future post. It’s an fascinating topic!